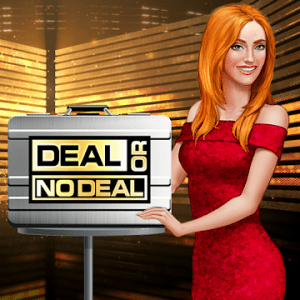 Deal or No Deal

Deal or No Deal Review

This is the app for a US TV show game Deal or No Deal. Here you have to guess which of the 26 cases has one million dollars in it and smart out the Banker. Be warned! This game will take away from your everyday life for good. Graphics and Sound 6/10 The elements and details of the app are …

Get App
RingsAround.net is not an official representative or the developer of this application. Copyrighted materials belong to their respective owners. We have a very high regard for our users’ security. All the links provided on our website pages are of the trusted sources or official representatives.
6
10
5
10

Deal or No Deal

This is the app for a US TV show game Deal or No Deal. Here you have to guess which of the 26 cases has one million dollars in it and smart out the Banker. Be warned! This game will take away from your everyday life for good.

The elements and details of the app are rather underwhelming - simple 3D graphics. The cases,  signs and general style of the game are similar to the TV show, but there's no host, only his voice in the background which sounds very similar to the original not sure though if it’s real Howie Mandel’s voice. The girls holding the cases are always the same with same dresses maybe sometimes they have different hair color or tan.

The sounds are as you expected them to be - a lot of fake background applause and cheers. The host sounds very similar to the original not sure though if it’s real Howie Mandel’s voice.

It’s pretty simple to understand and play this game. You have girls standing up holding the cases, on the left and right sides of the screen you have the cases’ value and, of course, your own case is in the middle. When the Banker calls you, you see his speech at the bottom of the screen and his offer in dollars at the top of the screen. The Deal or No Deal button is on the bottom of the screen, you, as in the original show, have 20 seconds to think before choosing to hit that button or not. That will decide if you think that you have less or more than the Banker’s offer in the case.

Features of this game are pretty simple - you have the same gameplay each time, and you have to find the 1,000,000$ case. But there are some different things you can do with tokens that are not in the original TV show (look below in the Pricing section of this review). You have level system here, so you do have a motivation to play this game more. For every round, you play you win experience and tokens. I didn't notice any difference in gaming experience with having a higher level, but I’m happy that it has that system, so I have something else to focus on in the game.

The app is very fast as it should be because it’s supposed to keep you at the edge of your seat. I had no problems or bugs during this game, and it never crashed.

In the Deal or No Deal, you can buy special tokens which can help you to get different perks in the game such as High Stakes, Knock out, Bank It, etc. They allow you to have additional bonuses of the game and you have more chances to win with them. Tokens are kind of official hacks of the game. I never tried to purchase anything in this game, so I can’t recommend that option - the tokes I received for free for playing and just as a daily bonus were enough for me.

This app can be very addictive and quite a time-killer so be careful. It did take a huge part of my day sometimes. You can play this game forever, and you’ll never be bored. Because there are so many chances to win 1,000,000$ case and you never know when it’ll happen. But when/if you win you’ll want to come back to the game to repeat the thrill.

I understand that this app is not even about luck - it’s about randomness I can’t help myself sometimes to continue playing to try my luck. Good that it’s not about real money - I would lose all of them so quickly. The game is illegal in some countries because though it doesn’t involve gambling with money, but it has tokens purchase inside the app meaning that you have to keep playing the game in order to spend money on tokens. So this game is gambling in some sense.