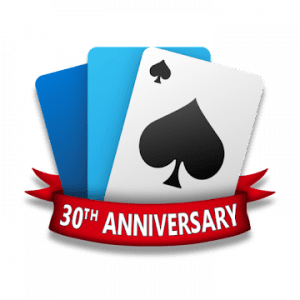 Microsoft Solitaire Collection is a set of the best games in this genre. You are suggested to play one of the five variants of this popular title adjusting level of difficulty to your needs. Complete challenges and earn badges or rewards which will be saved in the app and arranged as the stats. I …

Get App
RingsAround.net is not an official representative or the developer of this application. Copyrighted materials belong to their respective owners. We have a very high regard for our users’ security. All the links provided on our website pages are of the trusted sources or official representatives.
6
8
10
10

Microsoft Solitaire Collection is a set of the best games in this genre. You are suggested to play one of the five variants of this popular title adjusting level of difficulty to your needs. Complete challenges and earn badges or rewards which will be saved in the app and arranged as the stats. I think this is a very cool application for your mobile phone if you are fond of Solitaire. Please, mind, that it contains advertisement.

Well, you should not expect something unusual of graphics here. The game itself consists of a deck where cards are arranged in various ways on the table and should be moved. There are no special tools and characters. Still, the design is well-done here. You will see a green table with nice decks. There are settings allowing to choose difficulty pressing a large green button – you have no chance to miss it. The app shows your progress in the game during the current month. Everything is clear here.

As you know solitaire is a very popular card game with a long history. You will find it almost in any desktop. It allows to master such easy moves as clicking, dropping, dragging, and thinking of course. In this package, you will find five solitaire games which are not something completely new. As to me, I know all of them and believe that most of the players are familiar at least with one variant.

There are the following versions: Spider Solitaire, Klondike Solitaire, Free-Cell Solitaire, Pyramid Solitaire, and Tri Peaks Solitaire. All of them rather simple to play if you like to think and be attentive. You should just make a choice and take a card you think appropriate.

There are various principles for moving cards around. For instance, Spider Solitaire offers ️eight columns of cards. You should clear them making as few moves as you can. This is a perfect training to speed up the activity of your brain.

If you prefer strategic thinking, you should try Freecell Solitaire where you should use four free cells to move cards in an attempt to clear them all from the table.

And for those who want to play a new solitaire, the developer offers Pyramic solitaire. Here you should take two cards adding up to 13 and remove them from the board in Pyramid Solitaire. Your goal is to reach the top of the Pyramid clearing boards.

These games are almost endless. You can return to them again and solve the numerous puzzles with cards if you like such monotonous activity.

It is well-done with rather accurate controls which are clear and responsive. These games are constantly updated with new solvable challenges. Every game mode contains multiple levels of complicity which are also added every day. Thus, playing you will face new daily challenges and earn rewards. In general, the controls are easy. You are expected to tap, drag, and drop. But if new features involve some special moves, you will be instructed.

The app is free to download and play, but it suggests in-app purchases. Also, this title contains an advertisement.

As far as I have learned recently this game is preferred by over 240 million players. Things remain the same. Solitaire is one of the most popular games. You definitely should download this application if you are fond of them.